This year, The 26th Annual TTG Travel Awards 2015 Ceremony and Gala Dinner was held in Centara Grand at CentralWorld, the official venue sponsor for the event. This annual event coincides with Incentive Travel & Conventions, Meetings Asia (IT&CMA) and Corporate Travel World (CTW) Asia-Pacific – The World’s Only Doublebill Event in MICE and Corporate Travel. 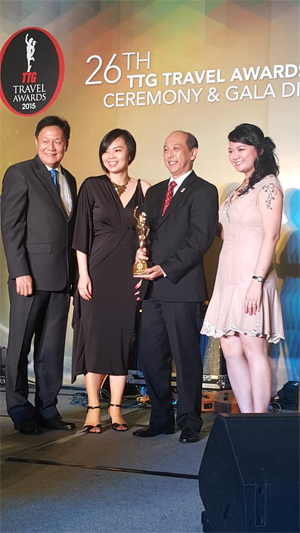 BANGKOK – TTG Travel Awards 2015 culminates on 1 October in celebration of the 83 winners who represent the best and brightest in the Asia-Pacific industry.

18 new winners have emerged across various categories, taking home the signature Hermes trophy for the first time. First-time winners such as Vietjet, Gardens By The Bay and Buffalo Tours have successfully claimed titles that were dominated by long-time winners, taking the honor of Best Asian Low-Cost Carrier, Best Theme Attraction and Best Travel Agency – Vietnam respectively.

The roll-call of inaugural winners also include POP Hotel Kuta Beach Bali, Mira Moon, Shangri-La Kuala Lumpur, The Westin Singapore, Crowne Plaza Changi Airport and Amari Phuket from the Hotels –Individual, positioning themselves as the best of the best in the travel trade industry.

While first-time and returning winners make their way into TTG Travel Awards, veteran organisations such as Qatar Airways, Thailand Convention & Exhibition Bureau, Resorts World at Sentosa Pte Ltd and Singapore Tourism Board have successfully defended their titles with consecutive wins, continuing their reign as the industry’s giants.

Other industry giants such as Tourism Promotion Board (Philippines) and Best Western International were handpicked by TTG Publishing’s editorial team as Best Marketing & Relationship Effort and Best Trade Supporter for their outstanding achievements. Myanmar was crownedDestination of the Year, and Mr. Ryoichi Matsuyama, President of JNTO was announced as the Travel Personality of the Year.

The Awards also welcomed 2 new TTG Travel Hall of Fame honoraries – Regal Airport Hotel and Banyan Tree Spa into the elite ranks of the travel trade industry for their impressive achievement of winning the same award over the l0 years. A virtual Hall of Fame (http://www.ttghof.com) was launched in late September with the objective to showcase the accolades and memorabilia of the Hall of Fame inductees to a global audience.

FREEDOM OF INFORMATION
Learn more about the Executive Order No. 2 - The order implementing Freedom of Information in the Philippines.
ABOUT GOVPH
Learn more about the Philippine government, its structure, how government works and the people behind it.
GOVERNMENT LINKS
© 2018-2020 TPB All rights reserved. Developed by Busybee
We uses cookies to ensure that we give you the best experience on our website.
By clicking Accept, you agree to our cookie policy and privacy policy. Accept and Close